Series / Studio 60 on the Sunset Strip 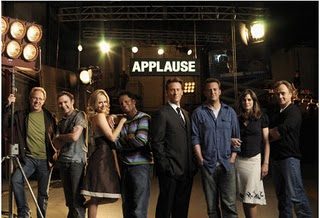 A.K.A. The other NBC behind-the-scenes of a sketch comedy show.
Advertisement:

Studio 60 on the Sunset Strip is a 2006 NBC ensemble show about life behind the scenes at a fictional failing sketch comedy show. No, not the one with Tina Fey. You're thinking of 30 Rock. This one was the one created by Aaron Sorkin, was an hour-long, had a much more dramatic slant, and ended up lasting only a single season.

After the creator of failing sketch-comedy show "Studio Sixty on the Sunset Strip" is fired for launching into an angry improvised rant on the state of television during a live broadcast, former writers Danny Tripp (now a producer barred from his next Hollywood film for testing positive for cocaine) and Matt Albie (presumed Author Avatar for Sorkin) are called in by plucky new network executive Jordan McDeere and her amoral boss Jack Rudolph to save the Show Within a Show, which stars Harriet Hayes (a fundamentalist Christian and Matt Albie's ex-girlfriend), Tom Jeter (all-American midwesterner with a brother serving in Afghanistan), and Simon Stiles (the Token Minority and not particularly pleased with it). Each week the cast deals with personal and professional issues in front of and behind the camera as they try to make sure the show gets off the ground.

And politics. Lots and lots of politics. For some reason.