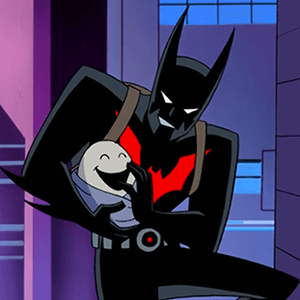 Babysitting and crimefighting at once? Of course this wasn't going to turn out sunny-side-up for you, Bats.
"Let's see what Mr. Chapin had you do while I was gone. Oh, dear, not the "egg" thing. That is so outdated! I mean, who can't take care of a simple egg?"
— DC Super Hero Girls 2019
Advertisement:

American kids, as part of their health ed class, often have to take care of an egg for a while and treat it like a child. If the egg is cracked or broken at the end, or they don't have somebody always looking after it, they will fail. Curiously, this plan is never cleared with the other teachers at the school, who are less than sympathetic when it interrupts their classes. Usually, the kids are paired for the assignment, but sometimes each individual kid has their own egg.

Generally, the kids are totally irresponsible, and will either play catch with the egg, fight over it, lose it among several hundred other eggs, or otherwise risk flunking. Hilarity Ensues. Often, when the students are paired, the main character will have to work together with someone he or she doesn't like — or may have another kind of tension with — to get themselves out of the mess they put themselves in.

A lot of times the egg breaks and they replace it with another one, only to be found out because the teacher had secretly tagged the egg in some manner.

This trope is also semi-common with teenaged superheroes, who must then try to fufill the assignment while keeping up with their crime-fighting.

This is something that Real Life high schools actually do to discourage students from having unprotected sex, the moral being: "Look at what a pain it is to take care of a kid at your age." In fiction, it may be part of a Sex Miseducation Class.

In the real world, the eggs have mostly been displaced by lifelike dolls, equipped with features to make them even more annoying, like a battery-powered chip which makes the baby scream. Only some Egg Sitting episodes have made the switch. Occasionally a third option is used, such as a bag of flour or sugar, which more properly imitates the weight of a baby.

Note that this is a very specific trope to the US (and perhaps Canada) and when it is encountered by others in American-made media, a common response is to think it an example of Aluminum Christmas Trees.

Subtrope of Parents for a Day. Compare Egg MacGuffin, the more literal version, and Babysitting Episode. When the pretense is replaced by madness, that's Baby-Doll Baby.