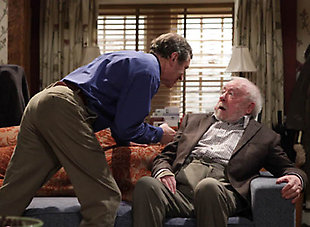 When you hear the term "victim of abuse" who do you picture? Someone being beaten or otherwise mistreated by their partner, a child or teenager being harmed, threatened, or neglected by their parents? Yes these are all real, and horrible, truths. However, there are others who can frequently find themselves victims of abuse, and what is one such group in society that does often find themselves in this scenario?

The elderly. Older people are often vulnerable, especially those who have Alzheimers or some other form of dementia, or who have communication issues which can make it difficult or even impossible for them to speak out against their abusers. Even older people who don't have dementia or other issues can sometimes find it difficult to get out of such a scenario, especially if their abuser is a primary caregiver and they have mobility problems. Then there's the fact that their abusers could be their children, and their natural parental instinct to protect their child, and therefore resist the urge to report the situation to the authorities, could very well be in play.

Like any other abuse there are several different types of elder abuse. The most frequent definition is given as "a single, or repeated act, or lack of appropriate action, occurring within any relationship where there is an expectation of trust which causes harm or distress to an older person"

and the subtypes are by and large the same ones as within Abusive Parents and Domestic Abuse. As with those, they can overlap:

As well, scam artists often prey on the elderly, as they can be emotionally vulnerable, might not be smart about such things as email scams, and tend to have a bit of money put aside for retirement, making them easily exploitable targets.

When elder abuse appears on television it can be portrayed in several different ways. Sometimes it appears in a "Very Special Episode" manner, written in by the creators to attempt to highlight the issue. Other times there are cases where it is Played for Laughs, used as a throwaway joke and forgotten about — the primary type in this category tends to be neglect and sometimes verbal abuse.

Sub-Trope to Would Harm a Senior. Contrast Never Mess with Granny and When Elders Attack.

Uh huh, one of the best jobs out there for an utterly corrupt and evil villain!

Uh huh, one of the best jobs out there for an utterly corrupt and evil villain!