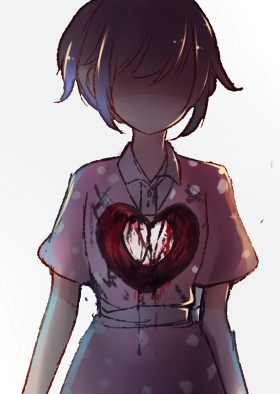 "All I felt... was emptiness."
"A sad shell possessed by the limitless power of the Master Crown, no more than a manifestation of the crown itself."
— Description of the True Final Boss, Kirby's Return to Dream Land
Advertisement:

This character is... barely a character. For many reasons, they've gone past the Extreme Doormat and Stepford Smiler and become nothing. They aren't a pushover or empty of real personality, they are completely dead inside. They are this side of a Convenient Coma because there is still something there — they move, talk, eat, sleep — but they have no drive, ambition, or capacity for emotion. Basically, the body is an active biochemical machine, but the part that made them alive and human is gone.

In Real Life, the closest term is probably "catatonic". However, catatonia is as likely to result from the inability to initiate movement as it is from lack of consciousness; the individual could be anything from fully conscious to nearly comatose, and you could never tell. More functional examples can usually be explained as a lack of a sense of self; they cannot form meaningful emotional connections to anything within their lives and often imprint on others, which often makes them appear as if their personality was cobbled together from scraps.

How did this happen? Here's a few ways: regular old Crapsack World-induced trauma, psychological torture, Mind Control, Mind Rape, Lobotomy, and/or high-end uses of an Agony Beam. It can be done metaphysically by being drained of all their Liquid Assets or Life Energy or having their Soul or part of their Soul Anatomy stolen. Then again, sufficiently radical body alterations can do this too, like being "upgraded" into a machine body, the aftermath of Literal Split Personality transformation to the original body, or a less-than-successful attempt at resurrection.

Sometimes, it's curable — other times, it's a permanent Fate Worse than Death. Expect these characters to be the preferred People Puppets for telepaths and demons for being not so much Weak-Willed as having no will at all. Contrast The Soulless, who are like Empty Shells filled with drive and ambition, and lacking all moral restraint. Compare to Soulless Shell, someone who died and was brought back without their soul. See also Too Broken to Break.