Fanfic / The Stars Will Aid Their Escape 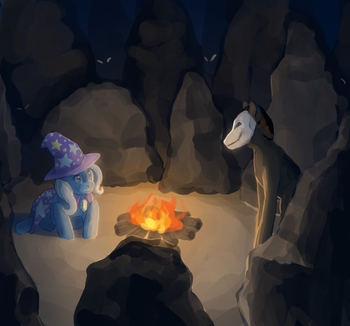 The Stars Will Aid Their Escape is a crossover fic of My Little Pony: Friendship Is Magic and the Cthulhu Mythos. After being driven out of Ponyville following the incident with the Ursa, Trixie flees into the Everfree forest, where she meets a mysterious masked stallion named Herald.
Advertisement:

Herald offers Trixie a chance to learn ancient magic that will truly make her the most powerful unicorn in Equestria, by offering her a book that not even Twilight Sparkle has ever read. But there is a reason Twilight's never read this book, and there is more to Herald than there appears...