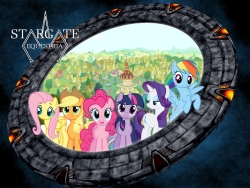 Stargate just got 20% cooler
They've met gods, fought gods, blew up suns, found Atlantis and a host of other things. Now, SG-1 must face their toughest challenge yet - Equestria.
Advertisement:

Stargate: Equestria is a crossover fanfic written by Bosstone in which the SG-1 team, after Daniel makes a mistake while dialing Earth, wind up in the cute and colorful lands of Equestria. At the moment it consists of two stories.

deals with the team arriving in Equestria, meeting the main cast, Celestia and dealing with some Jaffa, while learning the long forgotten history of Equestria. Told from Jack O'Neill's perspective, who is finding it hard to wrap his head around the place he's wound up in. It is complete.

is set after the events of Connection and is currently unfinished. In it an old enemy mentioned in Connection has returned and SG-1 is leading a mission to liberate the planet.

Has its own intro