I'm a Doctor, Not a Placeholder 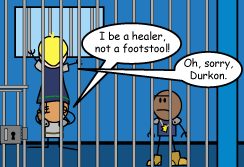 "Is that a dead body? Dammit, I'm a doctor,* of theoretical physics not a... normal doctor!"
— Dr. Gordon Freeman, Freeman's Mind
Advertisement:

A stock phrase that is almost always worded as: I'm an X not a Y. With X being their profession, and Y being whoever would be better able to do the job that they are having difficulty with.

The most famous example, and thus the Trope Namer, is Star Trek's Dr. McCoy — but the earliest example we have so far is from 1869, making it not only Older Than Star Trek but Older Than Radio. (It was in 20,000 Leagues Under the Sea.) Note that DeForest Kelley, contrary to popular belief, never prefaced his statement with "Damn it, Jim" or some variant thereof; he never swore on the show, given that it aired in The '60s. He did swear up a storm in most of the movies, however, so parodists naturally combined his potty mouth with his catchphrase, to great effect. (He never actually used his Catchphrase in a movie until the reboot — wherein he did swear, but he wasn't talking to Kirk, so the complete memetic phrase ultimately wasn't uttered until Star Trek Beyond.)note The reason why it's Scotty instead of McCoy that says "He's dead already!" in Star Trek II is that Kelley didn't want to mess up a dramatic moment by referencing the Catchphrase.

open/close all folders
Advertising
This ad for Trivial Pursuit

After getting stranded on the island, Craig thinks that Wildernessa knows how to survive on an island, but she tells him "I know about animals, not survival tactics".

After getting stranded on the island, Craig thinks that Wildernessa knows how to survive on an island, but she tells him "I know about animals, not survival tactics".