I'm Going to Hell for This 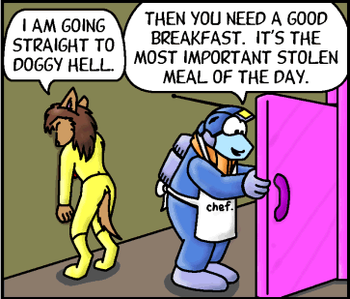 A Stock Phrase used to lampshade the inherent immorality or tastelessness of an action, a statement, or a joke. The action itself does not even need to be something that will certainly send you straight to Hell. Draw on the Pope's face in sharpie? "I'm going to hell for this". Ignore the "Keep off the grass" sign? You guessed it.

The common, and often stupidest, follow-up line is "...but it was totally Worth It."

A person doesn't have to actively be a Hell Seeker to invoke this line, although it can help. It may even turn out to be A Hell of a Time.

Compare "See You in Hell" where a character tells ANOTHER character they're going to Hell. See also You Are Worth Hell, when a character chooses damnation for love.