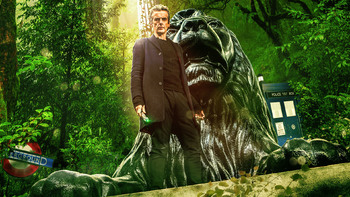 Great, Jordy Verrill's been here! note And no, the tiger statue is not real, thank god.
Click here to see the Radio Times magazine poster for this episode: 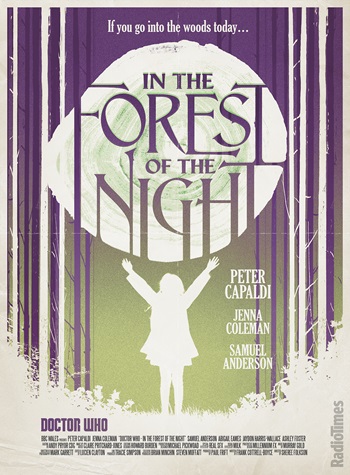 Tyger, tyger, burning bright, / in the forests of the night. What immortal hand or eye / could frame thy fearful symmetry?
"The forest — it's in all the stories that kept you awake at night. The forest is mankind's nightmare."
—The Doctor
Advertisement:

The one with the voice of Peppa Pig. And a metric f**k-tonne of trees.

We open in a jungle, where a child in a red hood runs through the woods and finds a magical blue box. How very fairytale.

The Doctor's inside, and a bit aggrieved (it's his default state now), but even though the girl hasn't got a Doctor's appointment, he lets her in anyway. Eventually, he figures out she must have a name and asks it — it's Maebh. Maebh's one of Danny Pink's students from Coal Hill, who appears to have gotten lost.

She's also surprisingly unflappable when it comes to the TARDIS's famous dimensional disparity. After all, you can't know everything. Even the Doctor can't — he was aiming for London, and the TARDIS keeps telling him he's there, but that can't be right! This is a forest planet, maybe this is that planet of shrubs —

All that "civilization" and "having cities" stuff humanity's been doing for the past few millenia's just gonna have to stop right there, because the trees have moved back in. Why? Maybe the plants are invading — it's happened before. Or something's trying to terraform the place with forests so they can move in later — again, wouldn't be the first time...

To properly find out, the Doctor's going to need Clara. She's just come out of a school sleepover in a museum, with Danny and her class in tow, and she's a bit surprised at all this wanton afforestation too. After a quick phone call to find out the Doctor's got Maebh, Team Coal Hill heads out to pick her up, while the Time Lord and child try to figure out what the hell's going on.

These aren't your grandma's woods. There's a Tyger and some wolves, and something far more fearful than symmetry — there's a solar flare on the way, just like the one that scorched the Bank of Karabraxos. Soon the whole planet will be burning bright.

Everyone's hands, and eyes, and all the rest of their bodies, are very, very mortal...

"Now, that was surprising. And I love surprises."