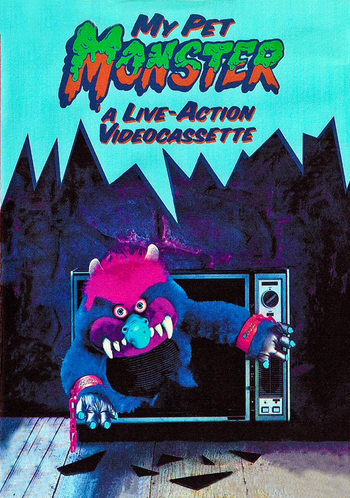 In 1986, the American Greetings Corporation released a line of plush dolls of a horned, blue-furred monster with orange plastic handcuffs that had a breakaway link on them. Known as My Pet Monster, this was one of the very few male-oriented plush toys of the day and proved quite the hit. So much so that American Greetings began working with the famous Canadian studio Nelvana to produce media featuring the character. And the first result of this endeavor was simply titled My Pet Monster.

My Pet Monster is a 1986 direct-to-video movie distributed by Hi-Tops Video (a subsidiary of the now-defunct Media Home Entertainment) and standing out as one of Nelvana's few non-animated productions. This Merchandise-Driven film follows Max, a young boy who gains the ability to transform into the titular monster whenever he's hungry after visiting a museum and being exposed to the mysterious powers of an ancient statue depicting the creature. With the help of his sister Melanie, Max must escape the clutches of the scientist who discovered the statue, Dr. Snyder, who seeks to capture Max for publicity purposes.

The My Pet Monster movie was created with the intention of being the Pilot Movie for a full TV series, but this ultimately never came to be. Instead, a year later Nelvana would produce an Animated Adaptation of the same name, which ran on ABC for 1 season. Unlike the film, which had very little to do with the toyline it was based on beyond the monster's appearance, the cartoon stuck much more closely to the idea behind the plush (namely having the monster as Max's friend instead of being something he turns into). It also featured several actors from the movie, such as Alyson Court and Colin Fox, although some of them took on slightly different roles. Tropes for the cartoon can be found here.

My Pet Monster also received a series of children's storybooks published by Golden Books (the children's book imprint of Western Publishing). They featured a similar setup to the cartoon, except the monster lived in a cave that let out into the basement of Max's house.

Tropes found in this movie