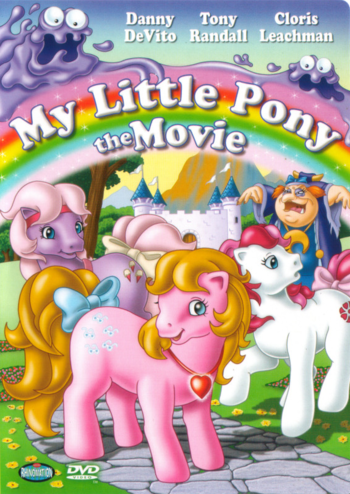 My Little Pony: The Movie was released in theaters in 1986, based on the Hasbro toyline My Little Pony. The movie was made by Sunbow Productions and Marvel Productions with the participation of Korean animation studio AKOM and Japanese animation studio Toei Animation, with a star-heavy cast including Cloris Leachman (Hydia), Rhea Perlman (Reeka), Charlie Adler (Spike, in one of his earliest voice roles), Alice Playten (Baby Lickety Split), Jon "Bowzer" Bauman (The Smooze), and Danny Devito (The Grundle King), among many others.

At Dream Castle, the Little Ponies are preparing a festival to celebrate the first day of Spring. They even go as far as to hold a ballet, which Baby Lickety Split ruins by dancing her way instead of cooperating with the others. After being called a show off by the others, she runs away, followed by Spike, the Baby Dragon.

Meanwhile, in the Volcano of Gloom, the evil witch Hydia watches the event via her cauldron and, disgusted by the frivolity, tells her daughters that they must ruin it. Hydia's daughters, Draggle and Reeka, are incompetent at causing mischief and fail utterly at ruining the festival. They return to the Volcano of Gloom in disgrace, where Witch Hydia presents a better plan - they'll make Smooze. The sisters collect a series of disgusting ingredients, but neglect to obtain the Phlume, the prospect of which terrifies them. The spell seems to work regardless, creating a pool of sentient purple lava that gleefully buries Ponyland.

The ponies go to their friend, Megan, and her younger siblings, Danny and Molly, for help. Who in turn go to the Moochic, who tells them to go find the Flutter Ponies. Thus begins an epic quest for living slime, weird friendly trolls called grundles, giant sunflowers, living trees, and much more.

In terms of the G1 MLP animated continuity, this movie comes after the My Little Pony TV Specials and serves as a prelude to My Little Pony 'n Friends. The ten-part End of Flutter Valley serial is a direct sequel to this movie.

Not to be confused with the 2017 film of the same name based on My Little Pony: Friendship Is Magic.

My Little Pony: The Movie provides examples of the following tropes: