This Is No Time to Panic 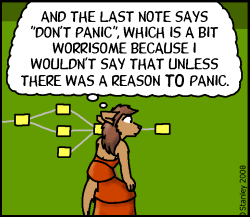 Buzz: Sheriff, this is no time to panic!
Woody: This is the perfect time to panic! I'm lost, Andy is gone, they're going to move from their house in two days, and it's all your fault!
— Toy Story
Advertisement:

Alice and her team are in desperate trouble, and her first instinct is to panic. Her second instinct is to remember that she shouldn't panic. Heroes can't panic when they've got a world to save or a fortress to escape from or a Big Bad to fight, and teens can't panic when their simple plan goes awry. So, caught in the most panic-worthy of situations, she calls out to her friends, "Stay calm! This is no time to panic!"

This has two common subversions:

Cue the running and screaming.

Despite what the media commonly depicts, it is difficult to induce panic in others, let alone panic on cue. One needs a sense of impending entrapment (if people feel themselves to be trapped already, they are more likely to give up and go limp), a sense of great helplessness, and a sense of profound isolation. As a result, in many cases, fictional panic occurs much earlier or later than it would in real life.

A trope that is automatically lampshaded by its mere use. Compare Stiff Upper Lip. Contrast Fear Is the Appropriate Response.

The girls freak out when the MirrorNet goes offline and Raven just assures them to not worry so much... until Apple reminds her about Prof. Rumplestiltskin's online test.

The girls freak out when the MirrorNet goes offline and Raven just assures them to not worry so much... until Apple reminds her about Prof. Rumplestiltskin's online test.