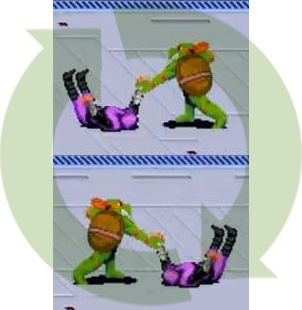 One way for a character to deliver a severe beatdown on an opponent is to pick said opponent up (often by the feet) and slam him left-right-left-right overhead into the ground, (a little like the pendulum of a metronome). It's generally an indication that either the character doing the slamming is very strong, or very angry or both. This can be played for even greater effect (or for laughs) if the character doing the slamming is either very small or, in normal circumstances, shouldn't have that kind of strength at all.

When the character doing it has no superhuman strength, this becomes the prefered way to compose a tongue-in-cheek representation of Judo or any other martial art.

A specific kind of Grapple Move.

The hobgoblin turned out to be too much for this martial artist.

The hobgoblin turned out to be too much for this martial artist.