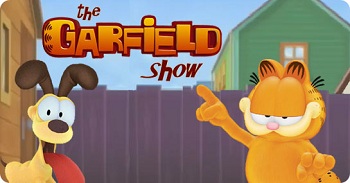 Yes, they're looking right at you.
Advertisement:

Another animated series based on the comic strips of Jim Davis. Unlike Garfield and Friends, however, this series was CGI-animated, and without U.S. Acres, Davis' less-known comic strip which was also featured in Garfield and Friends. The series was launched in 2009. It had numerous 11-minute episodes and half-hour specials during its run, but Cartoon Network eventually stopped airing the show.

Full episodes can be found on the official YouTube channel.

open/close all folders
#-M
Garfield: At least it's fresh. [noticing the turkey eating his food] Hmm, my dinner seems to be having lunch...
Jon: I'm sorry Garfield, I don't have the heart to end that little turkey's life and neither do you.
Garfield: I hate it when Jon's right. Fortunately it doesn't happen very often.
N-Z