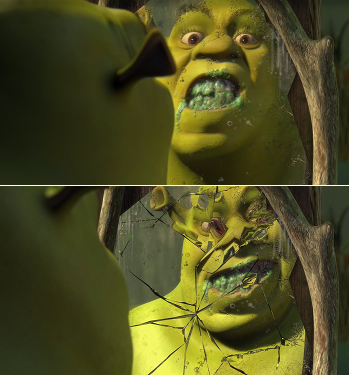 He breaks more mirrors that way.
Mirrors don't crack when I look in them. They scream and run away.
Advertisement:

A common comedy trope, especially in western animation, a character's ugliness is frequently conveyed by them smiling into a mirror, with their ugliness causing the mirror to crack as a response to the character's ugliness. A type of Informed Flaw sometimes, specially when it's featured in a visual medium.

Compare Rage Against the Reflection and Glass-Shattering Sound.