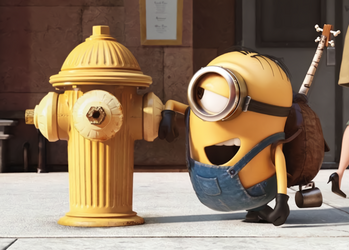 "Oh, foolish me! In love! With an empty shell!"
— Turtle, Sesame Street
Advertisement:

This is a gag trope where an animal sees something, mistakes it for another animal of its own species, and falls in love with it. The animal might catch on early on that its crush is actually an object, but then again, they may not. They may even try to mate with it.

Quite often the animal is male and mistakes the object for a female, possibly due to the stereotype that men are active but women are passive, but female animals mistaking objects for male animals isn't too rare. An animal getting a gay crush on an object, however, is quite rare, due to gay and bi characters being less common in general.

The object in question might be a toy animal or a picture of an animal, but it could also just be something not meant to be an animal at all, like a guinea pig mistaking a wig for another guinea pig. It may even be a celestial body, which could result in the animal trying to reach it. Occasionally played with by having a robot fall in love with an inanimate machine.

Sometimes invoked by deliberately making an object look like an animal, or making a dummy animal, to attract another animal of the same species.

Compare Interspecies Romance for when the love interest is not the same species but is a living, breathing creature, Cargo Ship for when characters are paired with objects in fanfiction, Companion Cube for when an inanimate object is treated like a person or pet, Imprinting for when a baby animal thinks a human is its parent (usually its mother), and Attractive Bent Species for when an animal falls for a human pretending to be an animal.