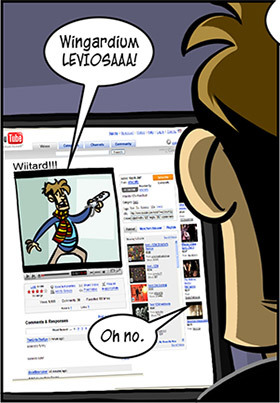 Ned: So how'd the fight go?
Mark: Oh you know, it was pretty even, basically a draw...
Ned: Really? On YouTube it looked like you got your ass kicked.
— 17 Again
Advertisement:

In modern fiction, characters will post embarrassing videos of each other on YouTube (or something eerily similar). This functions just like public humiliation, but instead of just their friends and family, it's everyone in the entire world. For such a young medium (YouTube was founded in 2005), this trope has acclimated rather well.

There's no closing the floodgates once word of mouth (or, more likely, word of Facebook and Reddit) starts travelling. Typically, the video will become a viral sensation, getting millions of views in a manner of days. Although not as common as depicted in the media, it is Truth in Television.

Sunset posts an embarrassing video of Twilight to prevent others from voting her fall formal princess.

I Saw Your Willy

Sunset posts an embarrassing video of Twilight to prevent others from voting her fall formal princess.

I Saw Your Willy