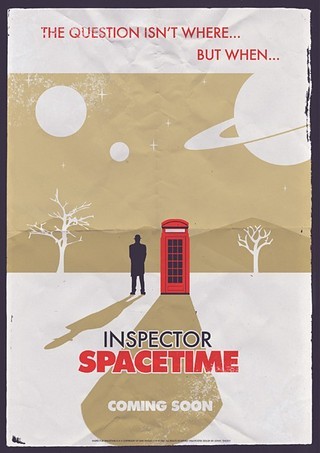 The Lunatic With a Booth.
"When you look out at the skies at night, what do you see? Starlight. From millions of stars. And that's just the light that's arrived here at one point in time. You can see every star, every planet, in one point of time, and never get the full picture. So really, the question isn't where... but when."
— The Eleventh Inspector
Advertisement:

Inspector Spacetime is a British sci-fi series that has been on the air since 1962 and has gained a worldwide following. It's long since established its niche as a cult classic.

The Inspector is an alien from a faraway planet who has come to Earth to rescue us from dangers across space and time. He travels the universe in his snug Model X7 Dimensioniser time boothnote  mistakenly called a DARSIT in the very first episode, a famous case of Early-Installment Weirdness, which takes the form of a red telephone box. (Fans nicknamed it, simply, the "Booth".) The X7 is famously "just a little too small on the inside," adjusting its interior dimensions to almost, but not quite, comfortably accommodate its occupants. Even when the Inspector is alone, it retains its cosily cramped atmosphere. This is often alluded to as the reason that friendships formed in the Booth are the closest one ever makes. Even so, as the Inspector says, "There's always room for one more."

The Inspector often recruits Associates, most notably Constable Reginald Wigglesworth (Reggie). He has also amassed a Rogues Gallery of villains over the years that includes the Blorgonsnote  a.k.a. the Blogons, the Digifleet, Thoraxis, and the Sergeant. Optic Pocketknife in hand, he will investigate the horrors of the universe.

The Inspector is the last of the Infinity Knights, the race of people who lived on his home planet of Kayaclasch. They once policed the universe with their advanced spacetime technological inventions, such as the time booths, but grew arrogant and corrupt in their twilight. They perished in the catastrophic Time Wave, and the Inspector is the lone survivor... or is he??

Now, to ease his solitude and pass on his knowledge, the Inspector brings Associates along for adventures as he travels the universe, inspecting the roots of all its mysteries. He is a man who must often make tough decisions to meet his ends. Like all Infinity Knights, the Inspector was born without a heart, which explains his tendency to be cruel at times. His personal quest for a "substitute" for this organ has so far been unsuccessful since duty and danger always come first. Still set on this goal, he often takes on Associates who are similarly searching for something or looking to improve themselves. Except Jeffrey. Everyone hates Jeffrey.

The Inspector's Associates provide something unique to the cast with each new addition, such as classic favorites the maths and English teachers Irma and Bart, the Gaelic swordsman Aiden, the late Jeffrey, the barbarian princess Reena, fellow Infinity Knight Lunda, the genius Yosif, the automatomcat FE-Line, and the long-runner Mary Sue.note  There are a few forgettable ones, though, like the utterly nondescript Benjamin. More recent Associates include Lily Taylor, Captain James Haggard, the Magnificent Bastard Yorke, Constable Wigglesworth, Angelica "Angie" Lake, and Rory Williams note The same character would later appear in That Ripoff.. The 2012 fiftieth-anniversary season introduced the Eleventh Inspector's newest Associate, "temporary" constable Geneva Stilton, who has gone on to be an official one for the Twelfth Inspector.

The programme won a devoted audience for wittily combining humour with scares and grew into a Long Runner despite Executive Meddling from producer British Television and distributor Boogatron Media—not to mention chronic underfunding, inconsistent script quality, archival carelessness amounting to sabotage, perversely wasted potential, and numerous other problems best left for another discussion. Fourteen actors have taken on the iconic role of the Inspector so farnote fifteen, if the Unknown Inspector from the 50th anniversary specials counts, alongside literally dozens of Associates, in an ever-expanding cast. The sheer AMOUNT of canon there is to go through might cause some Archive Panic, but it's well worth the hours you'll spend with it.note In all seriousness, though, there is already an effort in motion to write actual episodes of this series found here

The new series has successfully branched out into several Spin Offs within the franchise, although they do not Crossover with the main Inspector Spacetime series. Unlike their parent show, they are all situated on Earth and rarely involve Time Travel.

Early in the series' run whilst it was gaining popularity, an American studio obtained film rights to the series. The movie version notably isn't canon with the TV series and controversially changed many aspects of the series' mythology, for example changing the Inspector from an Infinity Knight to a human police officer literally named "Spacetime" and re-inventing the Blorgons as malfunctioning peacekeeping robots. For these reasons (and others) fans don't like to talk about this adaptation. (Except for the fact that its star Christopher Lee soon became the Second Inspector.)

Not to be confused with a far less popular imitator.

The origin of this landmark television show requires detailed examination too extensive and complicated to summarize here. note Inspector Spacetime is in reality a recurring gag/homage to Doctor Who made by Community, which first appeared in its season 3 premiere, "Biology 101", and has been regularly referred to in later episodes. But that doesn't mean we can't have our own fun with it!

open/close all folders
In-Universe Tropes
The Inspector: "Really should have seen that one. I mean, with the arm up the back. Who's arm was it anyway?"
Classic Series Tropes
New Series Tropes
Fandom-Related Tropes