Thriller on the Express 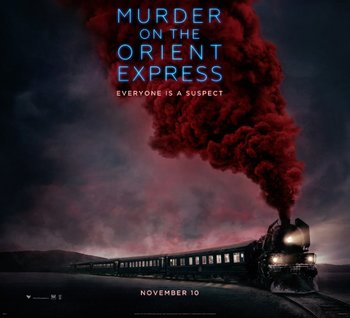 "The hour is two, London time. Tea has been served. A passenger in first class is dead. Thank you."
— The Conductor, Fallen London, The Twelve-Fifteen from Moloch Street
Advertisement:

Train journeys provide a number of advantages for plotting a thriller. They are an enclosed space with a sense of claustrophobia, uncomfortable proximity to strangers with several good justifications for why people can't leave. Long distance train journeys take several days during which the train is locked into a course going through wild terrain with no reception. This may or may not be the best time to commit a murder but it's a damn good time to write about one.

Thus it is that several works create thrillers set around a train. Despite all the advantages noted above, there may need to be adjustments made. Sometimes you just need that extra space or cubby holes to hide in so they'll make use of those places on trains people won't normally see, the kitchen car and luggage compartment. If train companies have made any security measures to stop people walking off the back door or getting onto the roof, they won't be in this film.

The train doesn't necessarily have to be part of the whole work. You might have a train based episode in a series but it won't be much of a Bottle Episode since it requires a new set and extras. There may be brief departures from the train but the time spent on the train should be enough to set up enough plot elements to stop people wandering too far or going to get help.

The Orient Express is a popular choice for the location, but the Moscow-Warsaw-Berlin-Paris "Ost-West Express" with its very distinctive green and yellow carriages plus Soviet crest is good for a Cold War story.

Compare Train Job. If it's an airplane instead of a train, that's Death in the Clouds. May occasionally but not frequently contain a Traintop Battle, most likely as a climax.

Not to be confused with dancing to Michael Jackson's Thriller on a train.