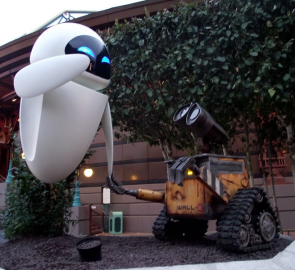 Sometimes, a robotic character, despite its composition of hard circuits and cold metal, completely melts your heart. Often just as lovable as their flesh and blood counterparts, these little guys/gals steal the show and the audience's affection. Non-robotic machines such as vehicles and appliances can also qualify for this trope, provided they come off as recognizable "cute" to human eyes.

The name of this trope comes from a song by Scars On Broadway.

Contrast Uncanny Valley, where the machine fails to be cute despite trying, and Mechanical Monster as well as Unnecessarily Creepy Robot, who don't even bother trying.