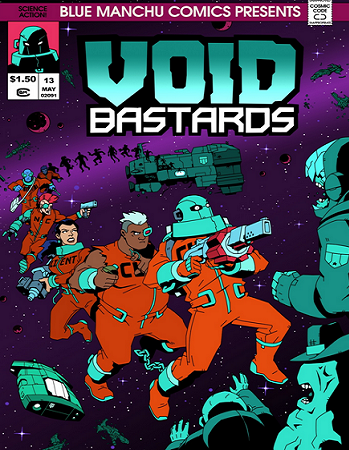 The comic-styled cover art.
Void Bastards is First-Person Shooter/Strategy/Roguelike hybrid with Cel Shaded graphics, developed by Blue Manchu and released on PC through Steam on 28th May, 2019. In it, you control one of the nameless inmates of a space prison named Void Ark, which got stuck in space after its FTL drive broke down and several of its core components were stolen by Space Pirates, leaving the wardens with no options but to free an inmate at a time and send them out to scavenge the nearby derelict ships for parts.
Advertisement:

Unlike most other shooter-roguelikes, it takes inspiration not from the fast-paced games like Doom and Quake, but from the slow, deliberate and immersive gameplay of Bioshock and its spiritual predecessor, System Shock 2. That's no surprise, though, since its lead developer, Jonathan Chey, had co-founded Irrational Games and worked on both games.

See Deep Sky Derelicts for a 2018 game with a similar premise and art style, but with a party, card-based, Turn-Based Combat.