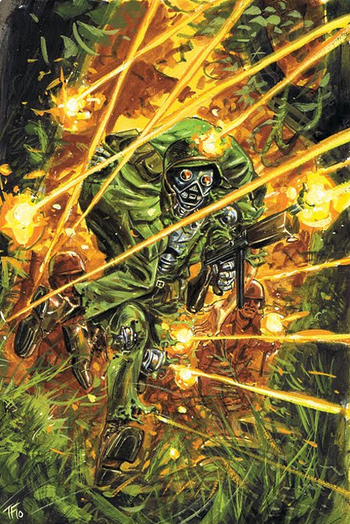 "What if this thing can read our minds?" Commander Kotay was saying.
"Then we must use soldiers who do not have minds," replied his companion.
"Alright then, I'll send in the latest intake from West Point."
"No, you military moron! I meant robots!"
— Plan 7 of 9 from Outer Space
Advertisement:

This trope is about any Robot that is built for the intent purpose of participating in a war as a combatant. These machines either supplement soldiers as a part of a battle force, or replace them entirely. They can be anywhere on the Sliding Scale of Robot Intelligence, but generally stand between 1 and 3 on the scale. Obviously, these robots are not Three Laws-Compliant, since they must be able to violate the First Law on a regular basis. This does not necessarily mean they are psychotic mass murder machines, though depending on who built them and why, they easily could be.

The distinction between this trope and Mecha-Mooks is that Mecha-Mooks are, well, Mooks. By definition, Mooks are disposable, mass produced bad guys with few or no special attributes that only exist to be easily destroyed by The Hero. So while robot soldiers can be mooks, there's no law that says "all fighting robots are mooks". A robot soldier can easily be anything from a mook (even an Elite Mook or Giant Mook), to an implacable killing machine, to the hero of a story. You'll see them often in a Robot War setting.

Related are Starfish Robots, which these robots may take form of in more realistic settings; and Mechanical Abomination, which could be a soldier as much as the robot soldiers' mastermind.