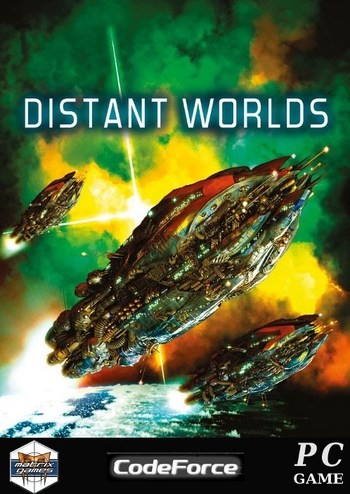 Distant Worlds is a vast, pausable real-time, 4X space Grand Strategy game that allows the player to experience the full depth and detail of large turn-based strategy games, but with the simplicity and ease of real-time, and on the scale of a massively-multiplayer online game.

Vast galaxies are made to order: up to 1400 star systems, with up to 50,000 planets, moons and asteroids. Galaxies are so deep, fun and immersive that you won’t want to finish the game... Build, expand and improve your empire endlessly. The galaxy is packed with life and activity. Encounter other empires, independent alien colonies, traders, pirates and space monsters. Explore star systems, asteroid fields, gas clouds, supernovae, galactic storms and black holes. Discover evidence of civilizations long since past, uncovering secrets about the galaxy's troubled history...

Enough of the sales pitch, Distant Worlds is a 4X game that innovates by using an automated macromanagement system that allows the AI to take control of as much of the game as the player wishes: one can delegate large swathes of gameplay to the AI which will automatically manage it, or so that the AI will make suggestions of the player, asking for only a thumbs-up. The game has three expansions (Return of the Shakturi, Legends and Shadows), each of which improve the game so much that playing without them is like night and day.

An Updated Re-release titled Distant Worlds: Universe was released on Steam on May 24th, 2014. This release includes the base game and all of its expansions in a single package, as well as modding support and a historical scenario of sorts that covers the first war of the Freedom Alliance with the Shaktur Axis, made as an example of what can be created with the game's modding tools.