One Nation Under Copyright 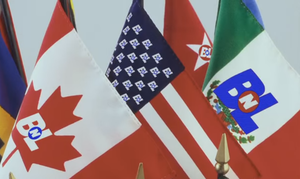 "O Buy n Large! Our home and shopping mall!"note Sing to the tune of "O Canada!"
"Actually, I'm Mayor in name only. The city and everything in it is really run by Shinra, Inc. My only real job is watching over Shinra's documents. Me! The Mayor! A librarian!"
— Mayor of Midgar, Final Fantasy VII
Advertisement:

A Mega-Corp is often a large, shadowy organization with a power base and structure that rivals even The Government. When you take it one step further, with the Mega Corp actually being the government during their Day of the Jackboot, you get One Nation Under Copyright, or a "corporate state."

Essentially, a corporate state is a government run and organized like a business. At the top is typically a board of executives (more likely than not corrupt in fiction, though perhaps with a few honest ones placed here and there) which makes all the decisions; for the common people, the terms "citizen" and "customer" (or perhaps "employee" is more accurate) are more or less interchangeable. Some may actually have a form of quasi-democratic government, allowing all shareholders a certain number of votes proportional to the number of shares the voter owns (the common citizen is likely defined as someone who owns only a few shares in this case). It's not uncommon for corpocracies in fiction to wield military power too; conflicts between competing corporate states can eventually spill over into Corporate Warfare of truly epic proportions.

One Nation Under Copyright may employ Law Enforcement, Inc., or even own them outright as a subsidiary.

If taken to the extreme by the government owning everything, this raises the question: "What's the difference between these and Dirty Commies?" Some might argue that this is the whole point. This idea—that "business runs government" and "government runs business" are basically the same—is at the heart of many, many populist and/or agrarian movements since at least the 19th century, e.g. G. K. Chesterton's "Distributism".

For when a corporation or other body has all the power and sway of a country without the actual country, see N.G.O. Superpower. See Company Town for a smaller-scale version where a town is owned by a single company.

Subtrope of Privately Owned Society. Very common in the Cyberpunk genre. If the story is set 20 Minutes into the Future, then it more likely than not takes place in either a Divided States of America or Japan. Not to be confused with Disney Owns This Trope, which is specifically about copyrights and trademarks (though the two may overlap). The Banana Republic trope is named after the United Fruit Company's string of puppet nations in South America (see the Real Life folder below), and many fictional examples of that will be mundane (and extremely unpleasant) examples of this trope as well.

Without the Toxic Avenger, Apocalypse Inc. has moved into Tromaville and have essentially enslaved the population.

Without the Toxic Avenger, Apocalypse Inc. has moved into Tromaville and have essentially enslaved the population.