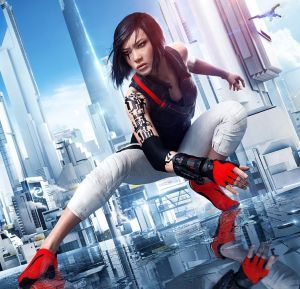 Go on, girl. Save us all.
I don't like what's coming, Faith. This city is changing, and not for the better. Unless, of course, we stop it.
Advertisement:

Mirror's Edge: Catalyst is an action/platforming title developed by DICE and published by Electronic Arts, and a Continuity Reboot of the original Mirror's Edge. It was released in June 2016 for PC (through Origin), Xbox One, and PlayStation 4.

The city of Glass is a modern-day utopia - at least, for those who live as part of the ultra-rich ruling class. Shining building facades and inspired futuristic design give the city a beautiful mirror finish, but the interior is rotten and corrupted to the core, ruled by the most powerful ruling families collectively known as the Conglomerate. Glass is the third-largest city in a corporatocratic nation, Cascadia, which rose from the ashes of a civil war.

Faith Connors is one of the Runners, a group of couriers who exist to fulfill the needs of whoever hires them and operate on the narrow edge between lawlessness and ruthlessness. Faith is one of the best, despite (or because of) her devil-may-care-attitude. Raised from a young age by her mentor, Noah, after the death of her parents during the November Riots that spawned the Conglomerate, Faith cares only for Noah and for her runs.

After a bad run with a rival cabal, Faith is arrested and in debt to a crime czar. Two years later, she is released from prison and given her first major assignment, going off book to follow a tantalizing lead. In doing so, she stumbles across a case of corporate espionage and steals information from Kruger Holding, the largest and most influential corporation in Cascadia. Worse, CEO Gabriel Kruger personally witnessed Faith's theft, which quickly means the corporation's KrugerSec division is out for her blood—and that of all of the Runners in Glass.

With Kruger on the warpath, the fragile balance that the Runners maintain with the rest of the city's disparate factions is upset. At odds with the other Runners in the city, Faith must unravel the conspiracy, get off Kruger's most wanted list, and re-earn the trust of her mentor and colleagues.

The game is notable for taking the freerunning platforming of the original game and adding in a gorgeous new engine, fresh and reworked gameplay mechanics, and an immersive open world to interact with, and has somewhat divisive existence amongst fans.