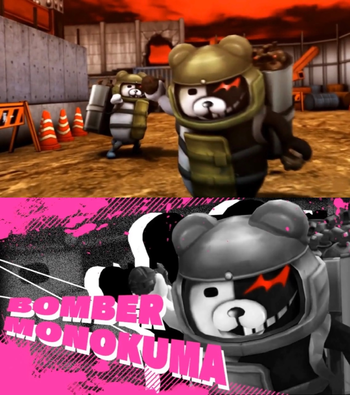 In some action games, there are many different kinds of Mooks and you're often too absorbed into the action to notice you meet a certain type for the first time. So if the developers really want to make sure you notice them and don't forget them, what should they do? Well, make a special presentation for each one of them! Or at least a good part of them.
Advertisement:

Thus, the unsuspecting player will often run in a seemingly deserted area and be interrupted by a cutscene. Cue a mook appearing stylishly from nowhere and maybe doing some threatening moves before the fight begins. The sequence is usually wordless but may feature a warcry of some sort. Naturally Elite Mooks tend to have a debut scene more often than minor mooks.

Will often overlap with Boss Subtitles, but not always.

Compare Degraded Boss, where an enemy is a boss at first but reappears as a regular enemy later.

And remember: Please do not even think about trying to list boss debuts in examples, as bosses usually get their own introductory cutscenes by default.

The Strogg Gunner is introduced, calling attention to their grenade attack that should be avoided.

The Strogg Gunner is introduced, calling attention to their grenade attack that should be avoided.