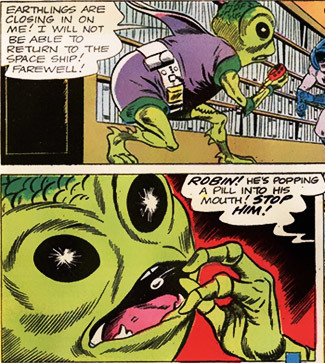 "Shoot him! He's trying to commit suicide!"
Chief: This pill, when swallowed, will bring painless death in about 20 seconds. Are there any questions?
Maxwell Smart: How do I get them to take it?
— Get Smart
Advertisement:

It takes a heroic level of dedication to be willing to die for a cause... but it takes an altogether higher (some would say crazy) level of dedication to be willing to kill yourself for a cause. Sometimes, a particularly devoted henchman will not only be willing to kill themselves but will carry around a mechanism to do this cleanly and quickly should the need ever arise. The classic example is the Cyanide Pill carried in a hollow fake tooth — the henchman simply opens the tooth with his tongue, bites down on the pill, and lets death embrace him.

It should be noted that this takes an altogether far higher level of devotion than that possessed by the standard Mook-for-hire. Absolute belief in the rightness of the cause is necessary for someone to take this step. Therefore, it's usually employed by cultists and secret agents in service to their country. However, it can also be used to imply that the Big Bad is so terrifying that death is preferable to the punishment he would visit upon his henchmen for failure. If you are facing a Fate Worse than Death, a Cyanide Pill would be your friend.

This one has some basis in real life — though uncommon, various spy agencies have issued suicide pills/devices to field agents to use in case of capture. U-2 pilot Gary Powers was carrying cyanide when he was shot down over the Soviet Union in 1960 but opted not to use it.

Use of the cyanide pill by villainous characters may be due to the historical use of such devices by many of the high Nazi leadership at the end of WWII who chose suicide over capture and punishment by the Allied forces (see Real Life section below for more details). Allegedly, Adolf Hitler himself, due to paranoia that it would not be effective, took one but opted to also shoot himself.

Compare and contrast Self-Destruct Mechanism and Leave Behind a Pistol. A Sister Trope to Suicide by Pills, which focuses on any character intentionally overdosing on medicine in pill form to commit suicide. See also Better to Die than Be Killed.

The little green blobs of the Left-facing man are exposed, causing them to swallow red crystals and vanish.

The little green blobs of the Left-facing man are exposed, causing them to swallow red crystals and vanish.