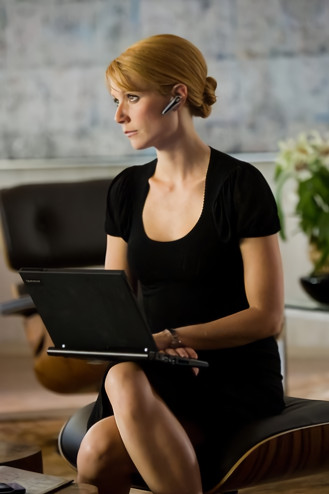 Christine Everheart: After all these years, Tony still has you picking up the dry cleaning.
Pepper Potts: I do anything and everything Mr. Stark requires. Including, occasionally, taking out the trash. [still smiling] Will that be all?
— Iron Man
Advertisement:

The faithful female servant. She's not an Action Girl on the surface, but neither is she a Damsel in Distress; her main job is to help out The Hero (usually her boss) at critical junctures. Sometimes she provides critical information, other times it's just a helping hand or heart, sometimes with a side of Unresolved Sexual Tension. Don't presume the Girl Friday can't fight, however — she can still kick plenty of ass, sometimes turning into a full-fledged Battle Butler.

The trope is a mainstay of both the workplace dramas and the Film Noir. In the latter, the hard-boiled lead relies on his girl Friday as one of the few people he can trust in the world.

The term is the Distaff Counterpart of "Man Friday," an expression that comes from Robinson Crusoe's "man Friday" (man as in manservant, Friday being his name); it was popularized for female office workers by His Girl Friday, a Screw Ball Comedy about a reporter's relationship with her editor/ex-husband.

The Evil Counterpart to this trope is Secretary of Evil. However, despite intelligence superiority being a crucial part of real-life warfare, it's rare for both heroes and villains in a fictional setting to have this type of character.

Compare with The Jeeves, Beleaguered Assistant, Sassy Secretary, and Hyper-Competent Sidekick. A step-up from the Sexy Secretary, with whom she's highly likely to overlap. Contrast Ignored Enamored Underling and Ditzy Secretary.

The 1994 TV movie of this name and the song by the Beat Crusaders are neither the Trope Namer nor examples of the trope.