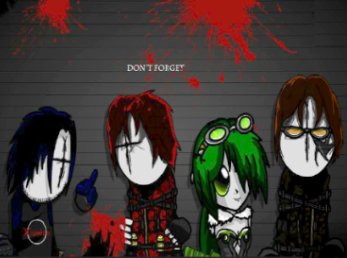 , a day dedicated to celebrating Matt Jolly's, AKA "Krinkels" original series, Madness Combat. Xionic Madness uses the same basic design; i.e., cross-faced people with disembodied hands and feet, (other than Kary-08 that is) but uses its own style of action. It's also notable in that the series has voice acting in later episodes, in contrast to its inspiration.

The story follows our cyborg heroes (other than Kary-08, who is entirely robotic) over on the right. Going left to right, Xero, the blue guy, is the hot blooded blade handler. Omega, the red one, is the leader of the group with a fancy for guns. Kary-08, the green girl, is the childish energy wielder. Askad, the yellow fellow, is the brainy explosive user. The four of them are sent on a mission (that is considered a suicide run) by the company that created them. Their objective: wreak as much havoc on a rival company that has been prying into their secrets as they can. Needless to say, they do just that.

They slaughter everything they see without a single thought. However, the mission retaliates by increasing its difficulty as the four progressively go deeper into it. In addition, they encounter XV, an experimental weapon developed by the company they are wreaking, which just so happens to be on the top of their "things to kill" list. They end up having to split up, and deal with the trials alone. (Though this still doesn't stop them from destroying everything.) Through all the difficulties, they manage to escape just before the N8 goes off.

And although they completed their mission, the true battle has only just begun.

You can find this series here

With no chance of everyone avoiding the necrotic energy blast Kary-08 throws at them, Omicron Squad collapse the building Omega is holding up to shield him from the blast.

With no chance of everyone avoiding the necrotic energy blast Kary-08 throws at them, Omicron Squad collapse the building Omega is holding up to shield him from the blast.