Literature / Awake in the Night Land 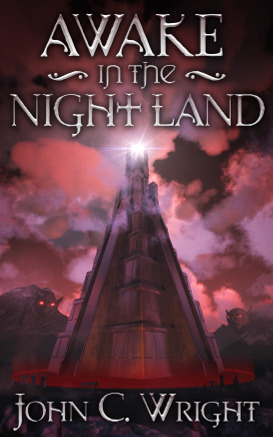 Are you Prepared to venture Out?
Awake in the Night Land is a book that collects four loosely connected stories, by Science Fiction author John C. Wright, set in the world of William Hope Hodgson's The Night Land. It is available on Amazon

and in a DRM-free version from Castalia House

It is set in the distant future when the Sun has gone out and the world is in an eternal night. Lurking in the darkness there are fearsome monsters who not only can kill the body but also Destroy the soul. The last millions of humans now live in the Last Redoubt, which is a miles high pyramid powered by the Earth Current, a mysterious source of energy that also has some spiritual properties and can keep the Powers of the Night away from the Redoubt.

The book tells the tale of the Last Redoubt of Man and the end of the human race. The stories are: