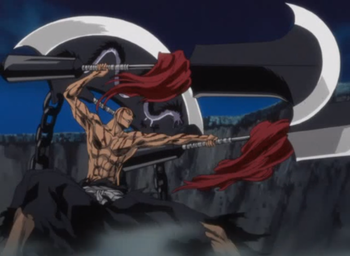 The laws of physics took one look at these blades... and just grabbed some popcorn.
"The double-ended laser sword. Now that is a seriously good way to cause major injuries to yourself. So you know anyone who dares to attempt to wield one of these suckers in battle is either incredibly good or incredibly stupid. And if they were that stupid, they wouldn't be standing in front of you with all four limbs still attached."
— Darths & Droids Episode 166

A weapon that is either impossible, unlikely, or impractical in Real Life, but in fiction is both existent and effective, Rule of Cool be thanked.

Usually made of a bunch of cool weapons and mash them together, such as many examples of Mix-and-Match Weapon, or cranking up the weapon's abilities.

A Sub-Trope of Rule of Cool.

Compare/Contrast The Power of Index specifically the "(Weapon Name) Are Better" tropes (when normal weapons are impossibly cool by themselves).

Not to be confused with weapons that should overheat but don't.

His giant tuning fork, which can shoot various energy beams.

His giant tuning fork, which can shoot various energy beams.