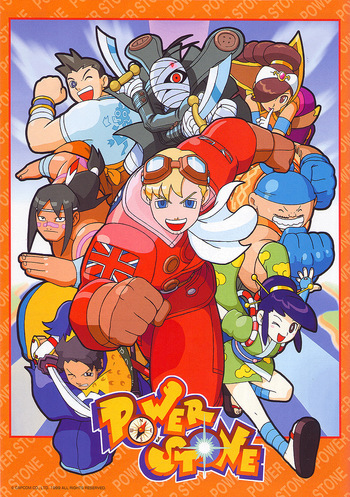 Welcome to the Power Stone world! Characters From back to front — Wang-Tang, Jack, Rouge, Galuda, Edward Falcon, Gunrock, Ryoma, and Ayame.
In the 19th century, people are strong believers of superstition and legend. Adventurers who seek the world for fortune and glory, and a legendary treasure which has the power to make dreams come true. That treasure is known as the POWER STONE.
— Opening narration from the first game
Advertisement:

Power Stone is a video game series created by Capcom. Beginning with the first game in 1999, Power Stone received only one sequel, Power Stone 2, the following year. The two games were released for the arcade and ported to the Sega Dreamcast, and later to the PlayStation Portable. It also received a 26-episode anime adaptation.

Gameplay in the Power Stone series is unconventional, at least compared to the many other fighting games by Capcom itself. For starters, fights take place in 3-D arenas. Items appear throughout the levels, such as weapons, obstacles and the titular power-ups-slash-MacGuffins, the Power Stones. When a fighter collects three of these, he or she transforms into a super-powered form for a limited time.

Not to be confused with Stone Man's weapon or one of the Infinity Stones.