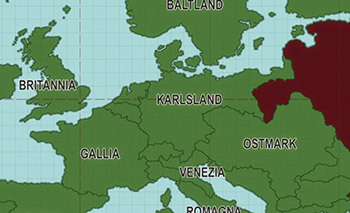 Whenever there's a fantastic Earth, or a world like our own yet very different, it's a safe bet that the author has messed with the names. Renaming things and places after what they could have been called is a very effective way to bring a touch of the exotic into the mundane, be it in The Time of Myths (Hyperborea for Greenland, Avalon for England), After the End (Amazon Desert, Empire of Denver, Whatever States of America), Alternate History or in another dimension.

Popular choices are alternate etymologies (eg. Allemannia for Germany), older names (Yamato for Japan), alternate names (Albion for Britain or Columbia for the USAnote But then you have to make up something else for Colombia and British Columbia — that is, assuming they're mentioned at all), names in the local tongue (Sakartvelo for the country Georgia, Nippon for Japan, Gitchegoomee for the native American name of the lake that Americans and Canadians know as Superior), things from local mythology (Jotunheim for Norway), possible corruptions and derivatives (Drontheim instead of Trondheim, though this one actually happened

), and just taking the easy route and swapping some letters around.

A common trend in alternate histories with early divergence points is to have Remus defeating Romulus in Rome's mythical founding rather than the other way around, leading to the creation of Reme and the Reman Empire.

As a general rule for most Anime featuring an alternate Japan (specifically those that take place during the Feudal Period), the country will often be renamed "Hinomoto", an alternate reading of the kanji for "Japan".

Best not to think about it too hard when characters from these different worlds meet, though. What are the chances, after all, that those two universes happen to have alternatively named or defined locations while maintaining a mutually intelligible language?

The trope name comes from the song of the same name written by Jimmy Kennedy and Nat Simon — a huge hit for The Four Lads in the fall of 1953, then re-popularized in 1990 by the cover version performed by They Might Be Giants.