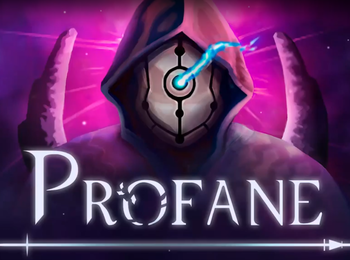 Did you ever wonder what would happen if someone took Furi, and stripped all story out of it?

The answer is Profane, a 3D top-down Boss Game, developed by OverPowered Team and released for PC through Steam on October 24th, 2019. Its premise is about the last Herald, Talaal, finding her brethren corrupted and having to put them down one by one, and that's as far as its story ever goes.

Gameplay-wise, Profane has the same ranged combat as Furi, with the default blue Frickin' Laser Beams and a Charged Attack briefly replacing them with a long, blue beam, and also the same dashing mechanic that makes player character invulnerable. However, it entirely lacks melee combat, instead replacing it with a castable spells. There's also a strict timer for each battle, which doubles as both Talaal's health and currency. This is designed to prevent the players from drawing out the battles or cheesing them through buying up upgrades.