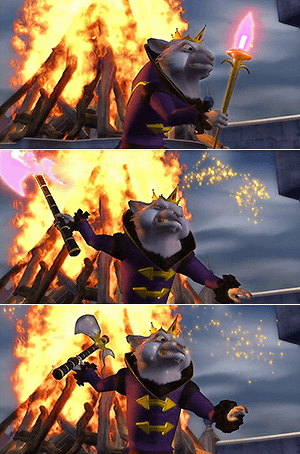 He swiped with his Blade, but didn't come close to connecting. 'I should have practised more with the sword,' he muttered.
Oh. That's right. You probably want me to be a spear, don't you?
The weapon fuzzed to mist, then elongated and grew into the shape of a silvery spear, with glowing, swirling glyphs along the sharpened edges of the spearhead.
— Words of Radiance
Advertisement:

A weapon that can shapeshift into different forms for different situations. Generally magical, but can be explained with Nanomachines or some other scientific flavour of Applied Phlebotinum instead. It might be guided by magic or Electronic Telepathy, or even be an Empathic Weapon with a mind of its own. Whatever the case, it tends to be significantly cooler than any boring old stays-the-same-all-the-time weapon. It is also an invaluable tool for the Multi-Melee Master, who can benefit from the increased versatility of multiple weapons without the encumberance of actually carrying those multiple weapons (but with increased danger of being disarmed if said user leans only on the morph weapon as his sole weapon).

A subtrope of Swiss Army Weapon.

A Sister Trope to Shapeshifter Weapon when it's part of the wielder's body, Retractable Weapon when it's limited to taking a more compact form, and Adaptive Armor for its defensive counterpart. Also compare Transforming Mecha.