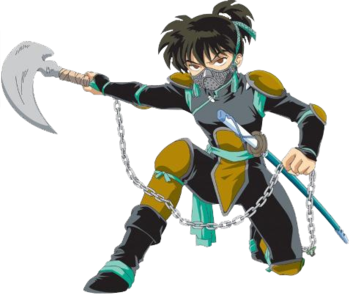 "Humanity has invented a thousand ways to kill one another over the centuries — why limit yourself to just one?"
— Fallen London
Advertisement:

A character who carries more than one type of melee weapon. Frequently, they carry a short-ranged weapon and a long-reach weapon. That, or a weapon that is good for offence and defence. They tend to have trouble changing between them, though, as it means he has to draw the new weapon and dispose of the old one somehow.

This can be rather tricky to do in real life, as different types of melee weapon can require radically different styles. This is most evident when it comes to weapons with hugely divergent physical properties. A swordsman can use an axe or spear with relative ease, but a flail's physical attributes are different enough for it to require entirely separate training and methods. Even among swords, remember that the idea that All Swords Are the Same is false; one uses a katana differently from a rapier or a broadsword.

On the other hand, this is also very much Truth in Television, as professional warriors were expected to be fully trained across multiple weapon types. For example, Liechtenauer stated that one should be adept in hand to hand, the use of the dagger, polearm (generally a halberd or polehammer), sword and shield, and most importantly, the longsword (which was the foundation of Liechtenauer's entire system, and a longsword at half-sword was wielded virtually identically to a polearm). Added to that, there are cases of professional warriors that used different weapons that did share some common way of handling: look no farther than this Greek hoplite with his long thrusting lance and his shorter-ranged slashing spear

◊ - in the context of a phalanx, both were handled with basically the same downward arm movement through the gaps between shields.

Note that this is carrying two different styles of melee weapon. A person who carries two one-handed swords in case one breaks is not this trope, that's just someone who carries an Emergency Weapon. A person who carries, say, a short sword and a shield, and a two-handed sword, in case they need more offence or defence, is this trope. Note also that this is not Dual Wielding. This is when characters switch between two different melee weapons depending on the situation. If they wield both weapons at the same time, that is Dual Wielding, not Multi-Melee Master.

Fairly common in fiction in general; characters who are competent with their weapons will usually be shown either (a) always using a Weapon of Choice that they rarely lose for long or otherwise ever trade in for anything else or (b) as being reasonably omnicompetent with almost any weapon they get their hands on. It's then a fairly small step from the latter case to this trope. A Morph Weapon can be employed to mimic the effects of having multiple weapons without actually having those extra weapons as encumberance, at the extra risk of being disarmed of their sole weapon.

Subtrope of Choice of Two Weapons. May also be a Walking Armory, if he doesn't use a Swiss Army Weapon instead. For the ranged weapon version, see Multi-Ranged Master.