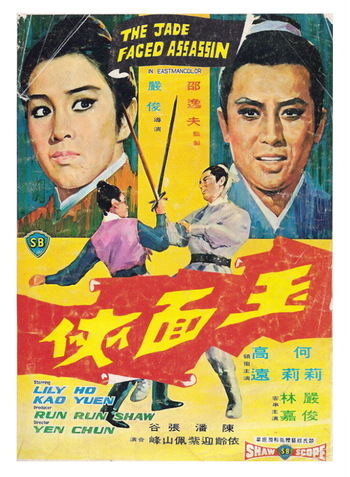 The Jade-faced Assassin is a 1971 Shaw Brothers wuxia film loosely based on the classic Gu Long novel, The Proud Twins.

A forbidden love affair in the martial world sends the clans in a massive uproar. The warrior, Zhang-Zhen, and the youngest daughter of the powerful Chang Clan, Yue-Nu, are lovers, despite their romance being forbidden by their respective families, and with Yue-Nu having bore a pair of twins as a result of their courtship, they are forced to be on the run from their clans with their children. But an unfortunate encounter with a band of marauders left the parents, Zhang-Zhen and Yue-Nu, killed in battle, with the babies taken in by Yue-Nu's older sisters.

Intending to restore honor to the Chang Clan, the eldest Chang sister intends to have both babies raised into adulthood and later make them kill each other to decide whom will be their worthy successor. The second sister, who saved the babies from the marauders in the first place, opposes that idea, and decide to have the babies separated into different allied families to prevent them from even meeting each other. The baby boy is taken in by the Hua Clan, given the name Hua Yu-chun and grows up to be a heroic swordsman, but as luck would have it, the baby girl, originally adopted by an old martial artist, ends up being stolen by a band of murderers called the Ten Villains, who ultimately decide to raise the girl, later named Hsiao Lu-er, into becoming their "deadliest champion".

When the eldest Chang sister found out the babies' fate, she will pull the strings to manipulate the long-lost twins into fighting each other to the death.

See also The Proud Twins, a later adaptation of the same novel, also made by the Shaws.