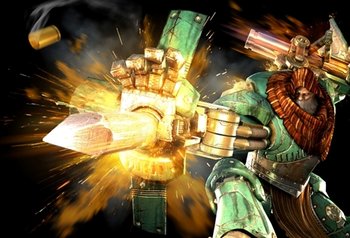 A weapon that shoots a single spike forward, which then retracts so it can be fired again, just like a pile driver.

A common weapon in the Real Robot Genre and other Sci-Fi works, but not necessarily used by the mecha themselves, as there are sometimes hand-held variants. Also, oddly, a uniquely Japanese trope, with very few non-Animesque Western examples. They work much like Real Life pile drivers, but rather than operating continuously (for example, hydraulically), they typically work with a one-shot chemical charge that drives the metal stake or penetrating spike, complete with Spent Shells Shower and a revolver mechanism.

Pile bunkers are sometimes built into a special gauntlet or arm for mecha or humans. Often, like with drills, it is justified by the need to penetrate heavy armor or barriers.

The spike usually returns to its original position after each "shot" (though how is not always apparent). Also, the pile bunker's firing mechanism must be made from incredibly strong materials, or it will explode (or at least have a very good chance to be damaged) every time the spike strikes the target, similar to a gun with a jammed barrel. Alternatively, it won't be able to penetrate a tough enough target. Also note that it would need to include a stopper made from equally strong materials that prevents the spike from simply flying out of the barrel like a bullet, thus having much greater attack range, which begs the question of why the spike, in fact, isn't simply fired like a bullet (although it could potentially be justified if the spike has to be made from specific, very expensive materials so that making multiple bullets out of them would be unaffordable, or if it is too heavy to carry additional spikes).

Usually an Ammo-Using Melee Weapon. Guns that fire the spike away should go into the nailgun category.