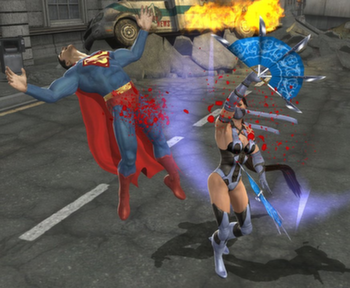 Superman is not a fan of these fans.
Advertisement:

A subtrope of Improbable Weapon User, using a handheld fan as a weapon is often associated with grace, class, elegance, and an air of mystery. It is often wielded by a Lady of War or Dragon Lady, as a folding fan is about as literal as Silk Hiding Steel can get. Given the normal use of fans is to blow air, it's often taken to its logical extreme and used to boost wind-based abilities as well.

This trope is generally associated with Japan due to the real-life martial art of tessenjutsu.

How the fan is weaponized varies. Sometimes, the edges are razor sharp; other times, its ribbing is composed of daggers like in the picture; lastly, the fan might not be sharp at all but will have solid steel ribbing, making it a blunt weapon (this one may sound the least interesting, but it's the most historically accurate).

Compare Paper Fan of Doom, a comedic trope where a Dope Slap is performed with a paper fan. The two tropes can sometimes overlap, when the paper fan is used as a viable weapon. Nothing to do with the Deadly Rotary Fan.