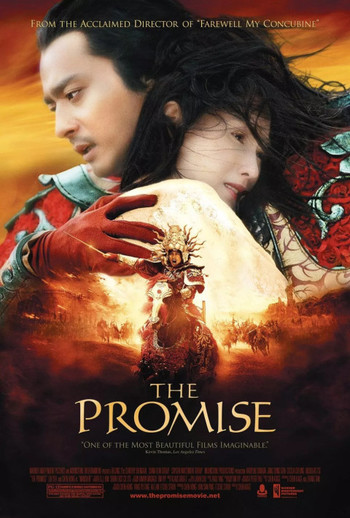 Not your average wuxia
Advertisement:

The Promise is a 2005 epic fantasy film with Wuxia elements, directed by Chen Kaige (The Emperor and the Assassin), starring Jang Dong-gun (Taegukgi), Hiroyuki Sanada and Cecelia Cheung, loosely based on The Kunlun Slave, a romance novel written by Pei Xing during the Tang dynasty.

Qingcheng, a young orphan alone on a battlefield, makes a wish with the goddess Manshen, where she can escape poverty and grow up in a life of luxury, if she is willing to live the rest of her life without being able to find her true love.

Years later, Qingcheng (Cecelia Cheung) grows up into a concubine of the emperor, just as Imperial General Guangming (Hiroyuki Sanada) returns from a campaign warring with barbarian tribes. With the general, is his slave, Kunlun (Jang Dong-gun), who doesn't have any memories of his past and is seeking the memories of his long-forgotten family. At the same time, the traitorous Duke Wuhuan (Nicholas Tse) plans to take over the palace and the land.

Contains examples for the following tropes: