Literature / The Rise of Kyoshi 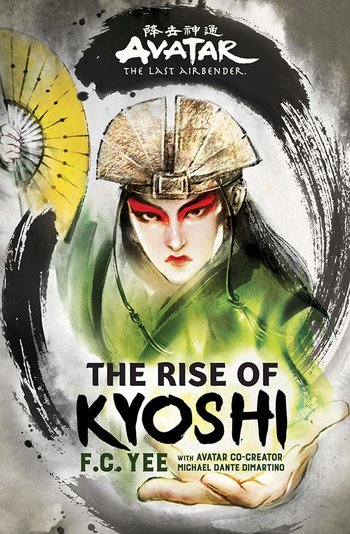 "What you do when no one is guiding you determines who you are."
"There is always one who stands above you in judgment."
— Avatar Kyoshi
Advertisement:

The Rise of Kyoshi is the first novel in a two-part series written by F. C. Yee chronicling the life of Avatar Kyoshi, taking place 412 years prior to the events of Avatar: The Last Airbender. The series largely follows Kyoshi through her teenage and young adult years, mapping her journey from a girl of humble origins to the merciless pursuer of justice still feared and admired centuries after her death, as well as touching upon her romantic interest in multiple genders.

Seven years after the untimely death of Avatar Kuruk, his friends and allies look throughout the Earth Kingdom in the hopes of discovering the new Avatar, master of all four elements. But despite everything, their search comes up empty handed, time and time again.

Until they discover a child they begin to suspect is the new Avatar.

In the meantime, simple servant girl Kyoshi watches on as Yun struggles to become the new Avatar, vowing to help him in any way she can.

Then things get real.

A sequel entitled The Shadow of Kyoshi was released on July 21, 2020. It jumps ahead two years in time to a more confident Kyoshi getting dragged into an internal conflict in the Fire Nation.