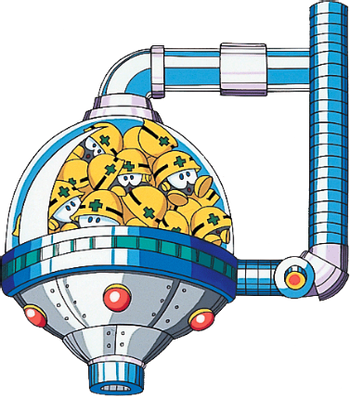 What infinity may look like.
"Oh my gosh! It's spitting out bad guys!"
— Slippy Toad, Star Fox: Assault
Advertisement:

A device or enemy whose main purpose is to constantly spit out enemies for the player to fight. Some bosses have this ability, to add to the challenge, to make the player want to hurl the controller at the TV screen, or to give the player something to use to hit or get to the boss villain's weak point.

Sometimes the Mook Maker can be destroyed; other times your only real tactic is to dodge them and move on. Or, depending on the game, the enemies can be farmed for goodies, points, cash, Experience Points, or Infinite 1-Ups. In the latter case, the game may cause the Maker to stop generating enemies after a while to prevent the player from abusing it too much.

If the Mook Maker is, in fact, a boss, expect to see it fairly late in the game, with the implication that the boss is the one who has produced all the Mooks in the game.

See also Clown-Car Grave, and Explosive Breeder. Compare to Enemy Summoner, which is like Mook Maker but with the ability to fight on their own too, Spawn Broodling when mook-making is a form of attack, or The Minion Master when a character has the ability to create Mooks. Weaponized Offspring may be a subtrope of this. Mother of a Thousand Young can overlap. This is also a good way a villain can avoid Mook Depletion.