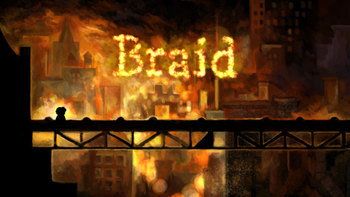 Tim is off on a search to rescue the Princess. She has been snatched by a horrible and evil monster.

This happened because Tim made a mistake.
Advertisement:

Take Super Mario Bros., add a few unlimited time powers, put it in front of an animated impressionistic canvas, throw in some seriously mind-bending puzzles and add a truckload of symbolism, and you have Braid by Jonathan Blow. You control Tim as he searches for a Damsel in Distress, while stomping various odd creatures to progress through levels and collect puzzle pieces. Tim can rewind, create Doppelgängers, slow time, and manipulate special objects and enemies that are either exempt or particularly vulnerable to his control of time, depending on the theme of the level.

Releasing originally for the Xbox 360 in 2008 ports came out for PlayStation 3 and PC in 2009. In 2021 a new remake would release for PlayStation 4, Xbox One, PlayStation 5, Xbox Series X|S, and Nintendo Switch with updated graphics and even a developer's commentary.

Warning: The following tropes contain multiple spoilers that will essentially ruin the game for you. Do not read them if you intend to experience the game the way it was meant to be experienced.