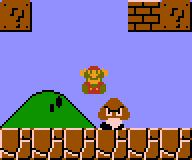 A death animation common to 2-dimensional Platform Games especially during the 8-bit and 16-bit eras; in which the dying character flies into the air before falling off screen, often in a "sitting" spread-out contorted pose. This may happen to enemies as well.