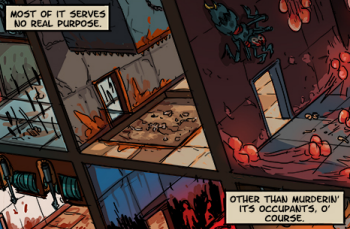 "Would you put up with a row of whirling knives in the cereal aisle at Safeway?" the Double Dragon guy asked. "Of course not. Why, then, should Duke Nukem have to run through a corridor of them to get the health pack he needs to survive?"
— The Onion, "Video-Game Characters Denounce Randomly Placed Swinging Blades"

Who designed this place?!

Imagine if, every time you went to work, you had to negotiate a complicated laser grid just to get in the building. Every time you needed to open a door, you needed to go on a long trek to find a key, which disappeared into the aether as soon as you used it. If you needed a new stapler, you'd have to push giant granite blocks around a room. Every room is a puzzle, every hallway a maze, and the slightest mistake invites death. Shortcuts? Forget it. They either prove impassable or zap you back outside the laser grid. And that's without having to fight every living thing that crosses your path. And it will be a different set of challenges during your next adventure. In short, everything is explicitly and obviously designed to make life as difficult for you as possible. (Not to mention in violation of every building code in existence.)

Such are the lives of video game characters, where the layout of buildings seems completely divorced from any practical purpose the designers might have originally envisioned for them. Castles aren't large walled structures where people live and work, they're intricate mazes riddled with spike traps, Monster Closets and hallways with pendulum-swinging blades or maces. Temples aren't places where people go to worship their various deities, they're where the ancients practiced their Booby Trap- and Death Course-making skills (and they were so good at it that they are still functional after hundreds of years without maintenance). Even places like warehouses and sewers, where the design should be fairly straightforward, are designed solely to deter intruders, even if there is no earthly reason why it should be so, and even if it utterly inconveniences non-intruders. One wonders what the regular people do.

In short, anything can be a dungeon if the designers need it to be. Related to Solve the Soup Cans. The architectural equivalent of Everything Trying to Kill You. Justified Trope if the building actually is a dungeon/prison or was designed to protect a MacGuffin. The Logical Extreme of this is Living Structure Monster when they're actually alive and actively trying to kill you.

Contrast Benevolent Architecture. Game worlds are often made up of equal parts Benevolent and Malevolent Architecture — this is one of the Acceptable Breaks from Reality, as without the former you wouldn't have a game and without the latter, the game would be too easy. Related to and may be caused by No OSHA Compliance. See also Theme Park Landscape, which doesn't distinguish between malevolent and benevolent.

See also Alien Geometries, for something that does something similar, except to your brain, and Stage Fatality, which is what happens when somebody weaponizes this during a fight.