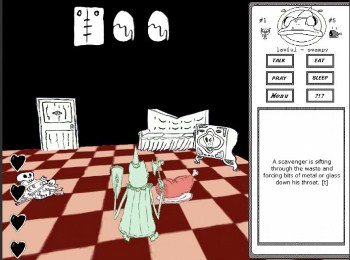 Yes, that's a skull in the washing machine: the real weirdness is yet to begin.
Advertisement:

Goblet Grotto is a freeware action-adventure title that has you assume the role of the toad knight Swampy, on a quest for valuable goblets found in a strange grotto. It was created by the team known as thecatamites and can be downloaded here

. The gameplay itself is simple, with the player character limited to a single attack, only capable of asking questions but not talking back, and lacking shops, an inventory or even a map. However, this is compensated by the game world being absolutely huge and bizarre, full of Flavor Text that rarely, if ever, matches up with each other but stays memorable regardless.

In 2022, an updated "cracked" version of the game was uploaded on Itch.io