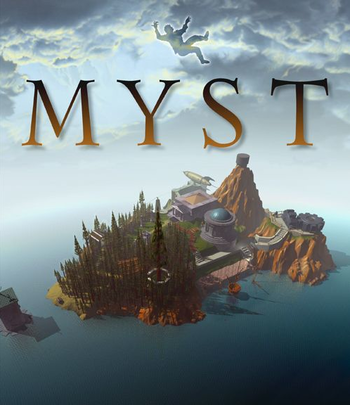 Imagine yourself back in 1993, and seeing a game like this for the very first time... if you were even born then.
"I realized the moment I fell into the fissure that the book would not be destroyed as I﻿ had planned. It continued falling into that starry expanse, of which I had only a fleeting glimpse. I have tried to speculate where it might have landed, but I must admit such conjecture is futile; still, questions about whose hands might one day hold my Myst book are unsettling to me. I know my apprehensions might never be allayed, and so I close, realizing that perhaps the ending has not yet been written."
— Atrus, writing in his journal at the end of Myst: The Book of Atrus
Advertisement:

Most games have a premise, dictating an objective which the player achieves through gameplay. Some games, however, have discovering the premise and the objective as part of the gameplay.

Myst is a puzzle-heavy first-person adventure game which sparked off a new sub-genre. Developed by the brothers Rand and Robyn Miller in 1993 who took inspiration from Tlön, Uqbar, Orbis Tertius and The Mysterious Island, the game became an unexpected hit, mainly due to its eerie, haunting atmosphere and, for the time, outstanding graphics.note The passage of time has masked this somewhat, but Myst's graphics were revolutionary. Look at the page picture. Now consider that the rest of the computer game world was still doing 16-bit. It was swiftly followed by a host of imitators, most of which are decidedly inferior to the original.

Myst is famous for its mind-bending logic puzzles and lack of character interaction - most of the games feature only a handful of NPCs and very little dialogue. Unsurprisingly, adventure fans are heavily divided over the merits of the game, with most players falling firmly into the 'love' or 'hate' camps. It has even been accused of helping to hasten the 'death' of adventure games, even though many gamers were introduced to the genre by Myst and its sequels.

The late Douglas Adams, upon playing Myst, cheerfully declared the game to be a 'Beautiful Void' due to the lack of other characters or life of any kind. (He also created Starship Titanic, which was a game with a very similar premise IN SPACE, with snarky robots.)

It is also worth noting that characterization of 'The Player' (sometimes called 'The Stranger') is achieved after an interesting fashion in that the few NPCs that play a primary role, Atrus and his family, treat the main character with familiarity that develops as the series progresses. This leads to the player's becoming something akin to their family friend, and subtly integrating the player themself as a character into the world of the game by avoiding dictating the nature of the protagonist.

The Myst games deal with the D'ni civilization, a race of people (not humans) that lived in a cavern under the Earth until their civilization fell a few centuries ago. The D'ni had the ability to write about locations they imagined in special books that could then physically transport a person to the places they described. Atrus, the main non-player character in the games, is one of the last survivors of the D'ni (though he's three-quarters human).

The Myst series has six games:

There are also several tie-in novels, authored by the Miller brothers themselvesnote Well... it should be noted that while the by lines say Rand (and Robyn, for the first one) Miller with David Wingrove, it would be more accurate to say that the novels were written by David Wingrove under the Millers' supervision. The fact that by the third book Cyan was too busy with Riven to really rein him in is something of a sore spot among the fans. Myst: The Book of Atrus tells the story of Atrus's early life with his grandmother Anna and his father Gehn. Myst: The Book of Ti'ana tells the story of the downfall of the D'ni (so this takes place before the Book of Atrus). Myst: The Book of D'ni tells of Atrus's attempts to find D'ni survivors and rebuild the D'ni civilization. And finally, Myst: The Book of Marrim, which seems to be permanently mired in Development Hell, though a preview chapter was released with the European Special Edition of Myst V. A fan-produced webcomic adaptation of The Book of Atrus was being made for a while and showed promise, but updates eventually stopped as the author got a job. And that was before host site Smack Jeeves went under, though backups of the published pages can still be found at the artist's DeviantArt

and the Jeeves archive.

At one point, there were plans for an independently produced (but still approved by the Miller brothers) Film of the Book (the Book of Ti'ana to be precise). The scriptwriters kept a daily-updated blog about their progress, with some rather odd digressions about their personal lives in connection with the project. However, those plans apparently fell through. Instead, Cyan partnered with the TV branch of Legendary Pictures to create a TV series based on the franchise, with an accompanying game...both of which also seem to be trapped in Development Hell (albeit with a little more hope, given that the developers still occasionally reference the series, whereas the movie project has gone utterly silent for some time). As of 2019, the rights have gone to Village Roadshow.

The series has also inspired an annual convention called Mysterium.

For the Spiritual Successor, see Obduction.

Oh, and there's now a licensed tabletop roleplaying game for the setting, Unwritten: Adventures in the Ages of Myst and Beyond

On April 9th, 2018, Cyan Worlds announced that to honor the 25th anniversary of the game, they would be re-releasing all of the official games in formats compatible with modern systems; furthermore, they unveiled a Kickstarter campaign

to fund a special limited-edition run of the multi-game collection. The campaign met its funding goal in less than 24 hours.

Example of:
You Fool!