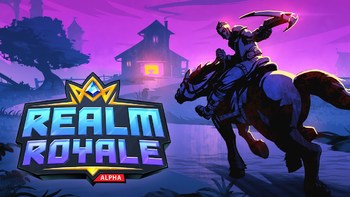 Choose a class. Forge your legend.

A Battle Royale Game created by Hi-Rez Studios, the creators of SMITE and Paladins. Set in a High Fantasy world similar to Paladins, Realm Royale airdrops one hundred players onto a large deserted island with naught but a cheap knife and a summonable mount to their names. They'll have to contend with each other as they loot chests and forge new weapons and abilities, all while a deadly fogbank rolls in, forcing them into ever-tighter confines.

Realm stands out from its contemporaries with a number of unique mechanics. Firstly, players can choose from four classes - Warrior, Mage, Assassin, and Hunter - which give a number of passive bonuses and lean towards a particular playstyle. Secondly, all players have active abilities (similar to the Hero Shooter that the game was based on) as well as slots for new passive abilities, all of which can be looted and swapped out as players prefer. Lastly is the forging system - unwanted weapons and abilities can be disenchanted for shards, which can then be used to create new, more powerful weapons and abilities at one of the many forges scattered around the map.

Players can queue for matches as teams of four, teams of two, or by themselves.

Sadly, since February 2020's OB23 update, Heroic Leap has put the game on "maintenance mode" (life support), meaning the game is no longer getting new content updates or balance patches as of writing* The small userbase of ~2000 players on Steam probably has something to do with that.

Tropes regarding Realm Royale are: