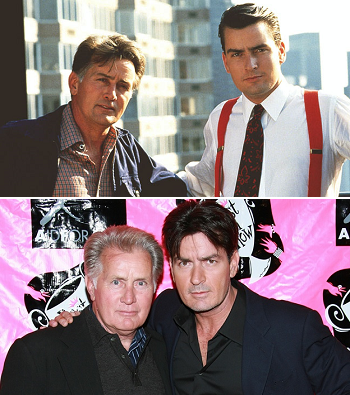 Starring father and son as father and son.
"When I started out, I was so focused on trying to do what seemed impossible, which was to get to be a movie director. And then I thought, well, if I could ever be successful at it, how I wish I could help my father achieve his dreams or my brother."
— Francis Ford Coppola
Advertisement:

When two or more characters in a show are played by actors who have some form of real-life relationship, be it familial or romantic, off-screen. The relationship is likely to be replicated on-screen: the actual family resemblance between real-life blood relatives can go a long way toward convincing the audience that their characters are family, and love scenes may well be more convincing if the participants are married in real life (though this isn't guaranteed). Another use of this trope is flashback scenes, having the regular actor's child or sibling play a younger version of them, ensuring a level of resemblance.

Can lead to some very interesting scenarios, including Actor Allusions, or may lead to more Reality Subtext issues than the production was actually looking for. (In films, this element can often be played up by the promotional machine.) For a more Squick version, there is Cast Incest, where the actors of characters who are blood-related go out in real life. The even squickier inversion is Incestuous Casting, where actors who play romantic partners on screen are blood-related in real life. It is also not unheard for a couple to be on opposite sides of an on-screen divide, making for some interesting Dating Catwoman scenes. Band of Relatives shows it's common for musicians.

Compare I Want You to Meet an Old Friend of Mine, Couple Bomb, Actor Allusion, Historical Character's Fictional Relative (where a fictional character is related in-universe to a real person) and Romance on the Set (where actors start a real-life relationship after being cast as characters with an on-screen relationship). A Real Life Sibling Team, a Creator Couple, or someone in the Family Business will do this frequently.

"On The Open Road"

"On The Open Road"