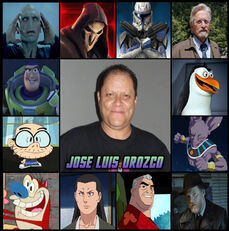 José Luis Orozco Flores (born on July 22, 1958) is a Mexican voice actor. He is well-known among the Spanish-speaking audience as the Latin American voice of Buzz Lightyear (and for Tim Allen in general, since Orozco has dubbed Allen more than any other Latin American voice actor), the voice of Beerus (or Bills, in Spanish) from Dragon Ball Z: Battle of Gods and Super, and the voice of Lord Voldemort in the Harry Potter films.

Orozco started his voice acting carreer in 1985, having enjoyed a somewhat quiet but still highly successful career until 1996 when he started voicing Buzz Lightyear, and again in 2013 when he started voicing Beerus. His pigeonhole is usually the Cool Old Guy or The Mentor; however, he's quite versatile and is just as good at playing villains, anti-heroes, or even wacky comic relief characters.

His children Alejandro, Luis Fernando, and Andrea Orozco are all voice actors in their own right.

As the VA for Tim Allen